There are some songs that are simply so good that they remain trendy for years after their release. The 90s have a selection of love songs that captured the essence of love from all angles, expressing feelings that all can relate to. We’ve put together 30 90s love songs that are still a hit today, touching the heart with every word.

The Spice Girls slow things down with this love song with universal appeal. The ’96 hit arrived and surprised us all, rewarding with a pop ballad that not only looked at love and bonding but also the importance of proper protection – an aspect accepted but often overlooked.

“Angel of Mine” by Monica

Monica’s “Angel of Mine” arrived as an instant hit, reaching the number one spot although being her last chart-topping hit. The music video left fans wondering whether there’d ever be a follow-up but one sadly new arrived.

This is a song that speaks for itself, a track of devotion that skyrocketed to success. It is, without a doubt, their greatest success story, carrying emotion in every word and relatable lyricism.

“Un-Break My Heart” by Toni Braxton

Toni Braxton’s “Unbreak My Heart” is a song that made the world fall in love with the already popular R&B artist. Her rendition of this timeless song will ring on forever as one of the greatest love songs ever heard and felt, with Toni performing the winning track many times over the years at illustrious events such as the AMAs.

“I Wanna Grow Old With You” by Adam Sandler

“The Wedding Singer” was a movie that not only showcased the comedic genius of Adam Sandler in action, but also his angelic voice and heartfelt feelings towards love. It’s a touching masterpiece that is as pure, and it is funny.

“This I Promise You” by NSync

When this ballad arrived as a part of their “No Strings Attached’ album released in ’99, not even the boy-band sensation realized just how popular it would become. “This I Promise You” would go on to feature on all three of their compilation albums.

“Head Over Feet” by Alanis Morissette

Fans loved this track, praising it for being a softer approach than what the world had come to know from Alanis Morissette. She even went on to record an acoustic version thanks to the massive appeal.

“Kiss from a Rose” by Seal

Seal’s masterpiece will forever remain elusive, with fans continually guessing as to what the song may be about, and what inspired it. It took years before “Kiss from a Rose” saw release. After all, “Batman Forever” which revived it as a theme song premiered in 1995 and Seal wrote the track way back in ’87.

“As Long As You Love Me” by Backstreet Boys

“As Long As You Love Me” arrived in ’97 as a part of the boy band’s “Backstreet’s Back” album. This, their second single only, became one of their greatest hits. The music video was an equal success, including the band’s signature chair dance routine which was used for years in countless other videos.

“I Love You (Always Forever)” by Donna Lewis

“I Love You (Always Forever)” is a love song that one can relate to, with the lead single inspired by the epic novel “Love for Lydia” by renowned author H.E. Bates. The only song at the time to stop it’s run to number one was the famous “Macarena” from Los del Rio, taking nothing away from the beauty of this ballad as a masterpiece.

This profound expression of love topped charts around the world, becoming the longest standing single on the U.S. Hot Adult Contemporary chart for a whopping 123 weeks. With eleven weeks at number one, and feeling that carries you through a heartfelt declaration of devotion, there’s no doubting just how inspired this song is.

“Crash Into Me” by Dave Matthews Band

As one of the stranger love songs out there, this is actually a track about a man watching a girl through her bedroom window. The voyeuristic soft rock song didn’t win any awards, but it was nominated for a Grammy in ’98.

Contemporary R&B in ’95 was rewarded with a love song that no one will ever forget. The soul carried by All-4-One in their timeless track has guaranteed in a place in the hearts of fans around the world, and streaming time, forever.

“Can You Feel the Love Tonight” by Elton John

Elton John’s masterpiece taken from the 1994 Disney hit “The Lion King” took the Academy Award for Best Original Song. It’s a song that added to the fine Disney tradition of epic love longs that express Simba and Nala’s feelings perfectly.

All My Life is a multi-platinum hit that was originally written in tribute to JoJo’s seven-year-old daughter Kayla. This shows just how universal the feeling of love is, with the4 ballad striking quite a contrast from the duo’s later creations as the provocative Jodeci.

“I Don’t Want To Miss A Thing” by Aerosmith

This hit, written by Diane Warren, was performed for the ’98 feature film “Armageddon.” The song easily rose to equal or greater popularity, carrying a hard rock message of pure love.

“My Love Is Your Love” by Whitney Houston

Whitney Houston infused many different elements of hip hop, reggae, soul and pop into this winning hit. It was one of her most popular singles, praised by the majority of critics as her best song ever released.

“When A Man Loves A Woman” by Michael Bolton

The voice of Michael Bolton will ring out singing this epic adult contemporary love ballad forever, thanks to his unique sound and the heartfelt lyrics that everyone just seems to get.

“How Do I Live” by LeAnn Rimes

LeAnn Rimes released this track in 1997, expanding her fanbase to reach a whole new scope of people. Within no time, it became both a country music and dance sensation with a catchy beat and thumping bass that the whole world couldn’t help but love.

“Kiss Me” by Sixpence None the Richer

Both the song and its music video became known by countless people around the world, raking in fans as it climbed the charts. It peaked at number two in the US while spending sixteen weeks in the top ten, and thirty-five in total on the rankings.

Bryan Adams created a love song that will last throughout time when he put together this early 90s masterpiece.

The Goo Goo Dolls had many hits, but few can compare to the overflowing emotion that can be felt by this, the most popular track they’ve ever released.

“This Kiss” by Faith Hill

Faith Hill approached a whole new market when she peaked on both the Hot 100 and Adult Contemporary charts with the release of this country-pop hit. Years later, “This Kiss” was used as the soundtrack for the 1998 feature film “Practical Magic.”

“I’ll Stand By You” by The Pretenders

Did you know that this love song has been dedicated to animal rights by lead singer and co-writer Chrissie Hynde countless times? The stern vegan created a song that became an anthem for animal rights.

“Have I Told You Lately” by Rod Stewart

Rod Steward’s cover of the Van Morrison classic became a universally known love ballad. What is quite surprising is how this track originally written as a prayer has ended up a favored choice for weddings.

“My Heart Will Go On” by Celine Dion

Whether this song or “Titanic” is the bigger hit will forever be disputed, but one thing is for sure – Celine Dion’s declaration of love is a song that will live on for eternity.

“Always Be My Baby” by Mariah Carey

Mariah’s “Daydream” album was a massive success story, with this song rising above them all as one of ’95s greatest hits. Her tale of the feelings that are sustained despite parting were words that the world could grasp, leading to the song and video featuring in all of her compilation albums due to the demand.

“You’re Still the One” by Shania Twain

“Because You Loved Me” by Celine Dion

Celine Dion’s ’96 hit written by Diane Warren is regarded by many as the greatest love song ever created. The moving track was developed as the theme song for the 1996 feature film “Up Close and Personal.”

Whitney Houston’s headlining role in “The Bodyguard” will forever live on thanks to this legendary love song. She took a classic and elevated it to an all new appeal, while at the same time showing the world just how much talent she had as a singer and actress alike. 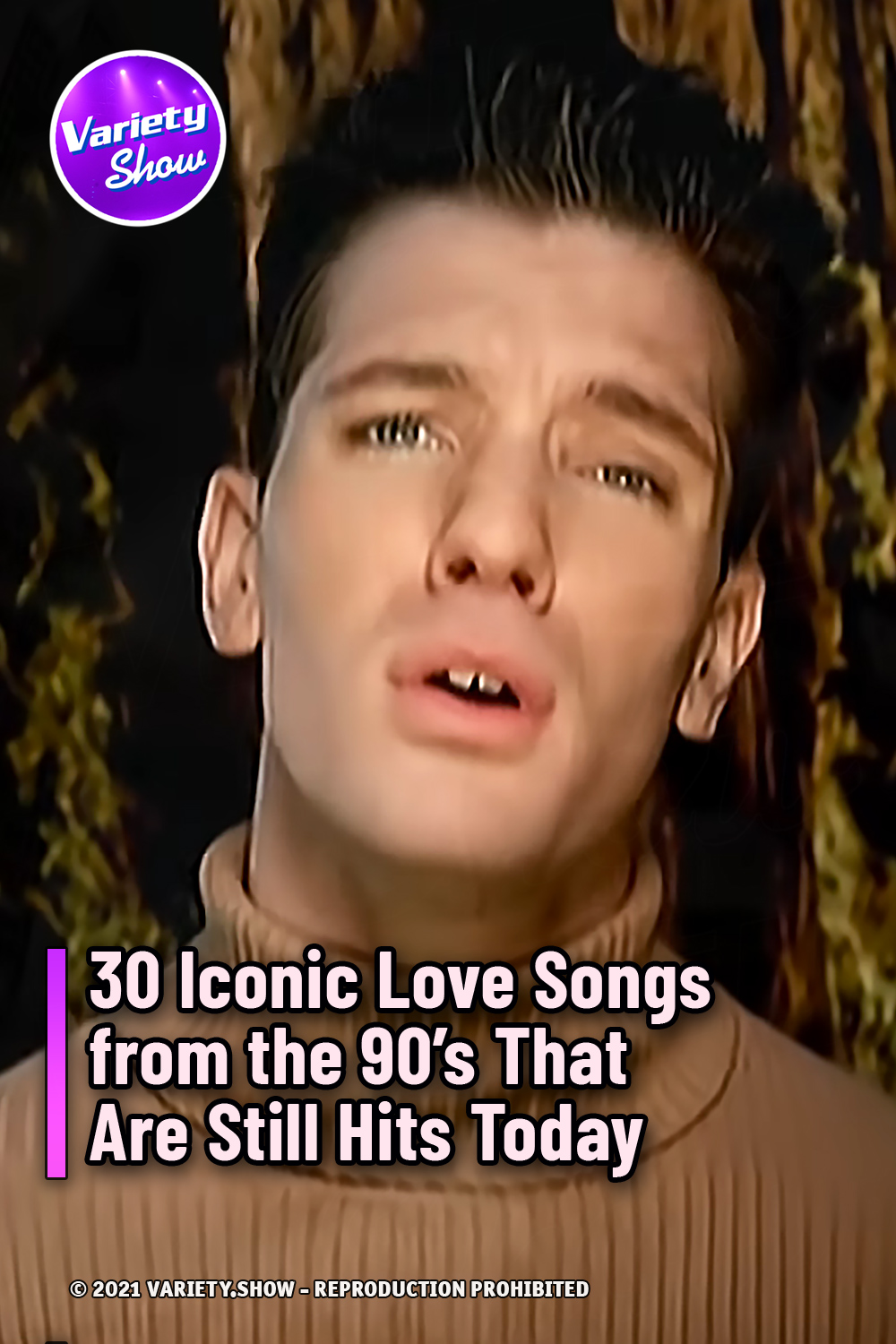